Ever wanted to know how an L2 differs from an L12?
Ian McAulay of Envision kindly explains UK pylon model types.
With illustrations from my pylon photo gallery and Ian's collection.

Prior to 1928, there were no standard tower designs at all. The then Central Electricity Board sought to introduce a standard design for the National Grid which was planned at that time. The final design was chosen by Sir Reginald Blomfield (a leading architect of the day) and was based on a submission by Milliken Brothers and much later designated PL1 and PL1b. Almost any single-circuit 132kV tower you have ever seen will be PL1b. Relatively few double circuit ones survive.


In the 50s a new range of line designations were introduced, beginning with L66.

L66 was the first range of 275kV towers introduced for the beginning of the supergrid in 1953. I think the only ones of these left are between Harker (near Carlisle) and Stella (Newcastle). This was followed by L2.

L2 are very common and built by the thousand. They were the first design for 400kV in about 1956 (although many are strung for 275kV). The late lamented Pink Pylon was an L2, easily identifiable by the near equal-length crossarms.


L3 is rarer. It was a 275kV-only design. The original design was very hard to distinguish from L2 apart from being smaller all round. Later versions have extended middle crossarms to reduce conductor clashing in high winds and are made from metric steel stocks and designated L3c. 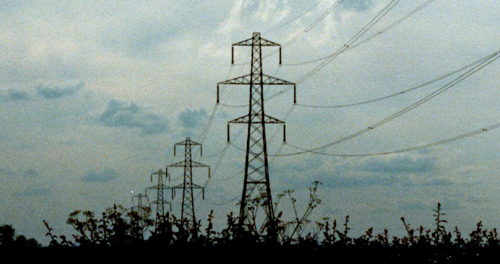 L6 was introduced around 1960 to provide additional current carrying capacity. L2 could take only twin 400mm2 conductors as maximum while L6 could take quad 400mm2.


L8 was a replacement for L2, with extended middle crossarms to prevent conductor clashing. Like L2, it will work either at 275kV or 400kV. The current metric version is L8c.


L12 is effectively the L6 replacement. It was introduced around 1980 and manages to have a slim tower body by making use of a lot of high tensile steel. Computer lattice design also allowed higher strength for a given weight of material. The slightly upturned crossarms make the tower instantly identifiable. These will take twin conductors up to 850mm2, but all aluminium conductor rather than the heavier steel cored kind formerly used.


L9 was a low-height equivalent of L6 and can be used interchangeably. They were sometimes used for visual impact reasons or to reduce the height under aircraft flight paths.


The low height towers near Thirsk bear the same relationship to L12 as L9 does to L6, but they are not classed as a separate series - just as part of L12.

L4M is the current design of 132kV tower with the slightly upturned crossarms that L12 have and look just like miniaturised L12.

Most tower series contain D, D30, D60 and D90 towers. A few also contain D10. D60 and D90 are very big beasts to resist the resultant force from the conductors which tends to pull the whole thing over to the inside of the angle. They generally have unequal length crossarms to provide more clearance on the outside of the angle and also to provide a tipping moment to the outside which helps balance the inward pull from the conductors.

Part of the reduced visual impact strategy for L12 is that the angle towers are D25 and D55 and so just a little lighter than D30 and D60 would be.

All tower types have a nominal "standard" height. Various height extensions are also available. For L12, these come in 3 metre increments and are designated E3, E6 and so on up to about E15. Height reductions are also possible and designated M3 and M6. Just to confuse the issue, the same nomenclature was used in pre-metric designs, so L2 comes in E8, E16, E24 and so on, but the numbers are in feet not metres!

This site moved from a fixed width to the current layout in 2009. Some older content such as photo sets may still have a fixed width. However if you notice any pages which are actually broken, please be kind enough to let me know via this form.